Using Your Face Tags for Your Contacts Instead of Theirs

Ever since I learned how to use Picasa to comb through my photos and gather the faces of people I know (using facial recognition) and then quickly assigning the best one of those thumbnails of their face as their picture in my Contacts, I've been on a long campaign to get all of my Contacts to have their picture.

Having close to a thousand contacts, this was/is quite a project.  However, well worth the effort because seeing their face in my Outlook Contacts, Outlook Emails, Meeting Notices, or on my Android phone or iOS devices is not only cool, it's a time saver.

Recently, I became the proud owner of a new Samsung Galaxy Note 3 phone.  After getting all of the apps installed and my contacts and calendars synchronized, I suddenly realized that for my friends that also have a Google+ account, their photos they picked as their Google+ photo was now the photo used in "my" contacts.

If you're someone that hadn't previously invested the time to create contact photos, this might be a magical blessing.  But for me, this was not desirable at all.

For example, I had selected a photo of a co-worker for his entry in my contacts:

Because that is the photo he chose to use on his Google+ account.

Went back to Picasa on my computer to try and fix this.  Even there, his default contact photo had changed to his Google+ photo.  Although it could be changed in Picasa, and the new photo selected for him did indeed show in my Gmail Contacts, his Google+ photo was still the one showing on my phone.

Ultimately discovered that the fix for this behavior is contained in the Google+ app on my Android phone.

This may or may not be an issue for iPhone users.  When you install the Google+ app on the iOS device and login to Google+ you are asked if you want Google+ to access your Contacts.  If you allow it, then it could be an issue (or a blessing, depending upon your perspective).

Posted by DavidC at 2:19 AM No comments:

Those of you that follow my blog know that I am addicted to the Google Toolbar and have struggled to keep it going in Firefox despite the fact that Google no longer supports it in Firefox.

See my previous posts on this topic:
Now, with Firefox version 24.0 we have yet another issue.  With the Google Toolbar Add-On extension installed and enabled, you can no longer open a new tab in Firefox.  You can open a second instance of Firefox, but when you click on the New Tab button (the + sign) or press Ctl-T nothing happens.  Oddly, if you disable the Google Toolbar for Firefox extension, then suddenly all of your new tabs you previously requested suddenly appear.

The only work-around found so far is to press the CTRL key as you click a link or right-click a link and choose, "Open Link in New Tab".  Once the new Tab is open, then use that tab for what you need.  Another possibility is to downgrade to Firefox version 23.

Another tip.  Type about:blank in the address bar, hit enter, which gives you a blank page, and then save that in the Bookmarks Toolbar, now you have a quicker way to right-click on a link to give you a new Tab to work with.

In a post on this forum: https://support.mozilla.org/en-US/questions/967747#answer-485381 a user called WhopperCock said:


"Type about:config into your browser, then type browser.newtab.preload into the long search bar that appears, then set the Value to False, restart browser and it should be working fine just like it did for me."

This worked perfectly for me.  Hope it will help others as well.  And thank you WhopperCock, whomever you are, for posting the fix.

A user reported that all of their Windows Desktop icons and shortcuts were missing on their Windows XP Service Pack 3 computer.  It was immediately assumed they had been bit with Malware, and they had.  Ran several scans with various packages to clean up this PC, but still the Desktop Icons were missing.

Then discovered that restoring these Desktop Icons and Desktop Shortcuts was super easy because hiding them, as it turns out, is an "option" in Windows.

So it was simply a matter of right-clicking on the Desktop, choosing Arrange Icons By, and clicking Show Desktop Icons.

It's unclear if the malware turned off the icons or if the user did it by accident.

Thanks to this MS article for helping solve this:
http://support.microsoft.com/kb/330170

Unable to re-join a computer to a Windows Domain

Last week a co-worker had an interesting (this means frustrating) problem.  The hard drive in a Windows XP SP3 desktop computer was bad.  He replaced it and then restored the backup image using Symantec System Recovery.

Unfortunately it wouldn't let him login to the Active Directory domain after the restore.  We have run into this before and in the past we simply login to the PC as a local administrator, un-join the computer from the domain and then re-join it to the domain.

When he went to re-join the computer to the domain, he kept getting this message:

We repeatedly used this command to see if there were any active connections:

And then this command to delete all connections (even though there were none listed):

We ultimately figured out the issue was previously mapped network printers were in the list and this was preventing us from re-joining the domain.  We not only had to delete these network printers from the Printers list, but also had to walk the Windows Registry and delete all references to these printers.  Once done, we rebooted the PC and then successfully re-joined the Windows Active Directory Domain.

Posted by DavidC at 1:50 PM No comments:

Last night I spent a significant amount of time working on a Windows XP Service Pack 3 machine.  The symptom was that when you went to do a Windows Update or Microsoft Update you would ultimately get an error code:  0x8007041d

I ultimately learned that error code 0x8007041d means that the Automatic Update service cannot start.  In fact, to save time, I ultimately just kept trying to start the  "Automatic Update" service after each thing I tried, and once it finally started, I knew it was fixed and then Windows Update worked normally.

I tried a multitude of things and I wanted to list them all here, because each of the steps seem to have varying degrees of success for others in correcting this issue.

You do not have to do these in any particular order, it is just the order in which I did it until I found the ultimate cure.

Download the Windows Update Agent installer to the root of your C: drive.
http://download.windowsupdate.com/WindowsUpdate/redist/standalone/7.4.7600.226/WindowsUpdateAgent30-x86.exe

Then run this command from a command prompt:
WindowsUpdateAgent30-x86.exe /wuforce

Delete a folder called wups.dll which is found here:
C:\WINDOWS\system32\SoftwareDistribution\Setup\ServiceStartup\
(It will be re-created when you attempt to run Windows Update again)

[STEP 5 - My Ultimate Fix]
This next command will require the Windows CD.  In my case, I copied the contents of the i386 folder from a Windows XP SP3 CD to the root of the C: drive.  Then when prompted, point to the C:\i386\ folder.

Hoping one of these will help someone else.  This was a very aggravating problem for me.

Clicking an Evernote Link in Outlook causes a Security Notice

I love Evernote. It has made me and my team extremely productive.  Especially now that we are using Evernote Business.

We often email each other links to particular Notes. But in Outlook 2010 (and Outlook 2007) it is very annoying when you click on an Evernote hyperlink within the email as you will get this Microsoft Outlook Security Notice: 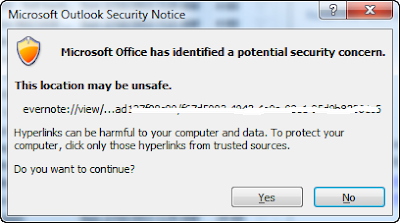 I began looking for a way to stop this.  I did find how you could disable the Security Notices altogether, but I just wanted to stop it for Evernote links.

I found part of my answer in a Microsoft Knowledgebase article:
http://support.microsoft.com/kb/925757

In that article look for the section titled "How to enable or disable hyperlink warnings per protocol".

It says to look for a registry key called:
HKEY_CURRENT_USER\Software\Policies\Microsoft\Office\xx.0\Common\Security\Trusted Protocols\All Applications

My Windows 7 machine running Office 2010 only had this:
HKEY_CURRENT_USER\Software\Policies\Microsoft\

So I had to create the rest by right-clicking each leg of the tree and adding a new key.  Note that on the last entry there is a colon after evernote. 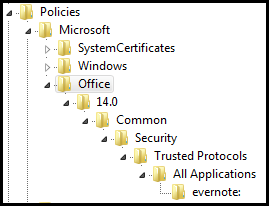 Once these registry changes were made, it immediately began to work.  Now when I click an Evernote hyperlink in Outlook it opens Evernote to the correct note without that nagging message.

As always, I'm hoping this will help someone else.

Getting Pictures out of Go SMS Pro

I'm writing this in hopes that it will help someone else. I have an Android phone (HTC Evo 4G LTE) and I love using Go SMS Pro as my default SMS Text Messaging app.

My girlfriend's daughter recently had a beautiful baby girl and has been sending me lots of great photos via SMS that she takes on her iPhone.

As they come in I faithfully save each one, but it saves the pictures to: /mnt/sdcard/GOSMS/Downloads

Unfortunately when I connect my phone to my PC and use Google's Picasa to transfer the pictures, it doesn't find them.

Tonight I discovered a very nice (and free) app called QuickPic.  It is far better than the stock Android Gallery app.   It scans your entire phone (and SD card if you have one) and displays all of the pictures on your phone.  I even found pictures I didn't know I had.

You also can "copy" pictures from one folder to another, not just move them.  Another feature I really like about QuickPic is that for each picture you can choose details and quickly see where the picture is stored on your phone, the size, the resolution, and the date-time stamp.

I will be using QuickPic instead of the built-in Gallery app from here on.